Herbs are the main and indispensable ingredient of absinthe. You can find a wide range of herbs in absinthes. The principal botanicals are grande wormwood, green anise, and Florence fennel. Many other herbs may be used as well, such as petite wormwood, hyssop, melissa, star anise, angelica, peppermint, coriander, veronica or other herbs. The choice depends on the producer of the absinthe. Mostly, the producers keep the number of herbs in their products in secret. The source of the herbs can be from anywhere in the world. Most herbs, however, come from France and Switzerland. The various combinations of herbs are endless. The origin and the combination then influence the taste and fullness of colour. The choice of wormwood influences the volume of thujon. Once again, the combination depends on the producer.

Thujon is a substance gained from wormwood. Paradoxically, its alleged psychedelic effects seem to act as a shrewd marketing move nowadays and help their producers promote their products. In April 2008, a study by leading absinthe experts was published, focusing on analysis of the old absinthes and their contents of thujon. Research has proved that absinthes from the 19th and beginning of the 20th century contained up to 48.3 mg/l of thujon. This disproves the statements that the volume of thujon in the original absinthes was multiple times higher than in today’s absinthes. Based on current European norms, no beverage with the volume of alcohol of 25% or more may contain more than 35 mg/l of alpha and beta thujon.

Maceration is done in large stainless steel barrels. Firstly, the herbs are macerated in alcohol, and then the semi-product is distilled. The duration of maceration is given by the producer – it may take as much as several days. In cases when the distillate is coloured with the herbs even after the distillation in order to gain a bright green colour, the absinthe is called absinthe verte, or green. The distinct green colour is caused by chlorophyll from the herbs used for the colouring process. 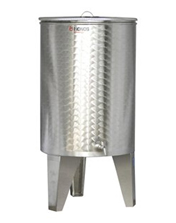 The alcohol used for the production of absinthe is always very fine, mostly gained from grains. Also fruit- or honey-based alcohol may be used. This depends on the producer of the given product. The distillation can be two- or three-phase, while in certain phases the herbs are exchanged or added. The final distillate is purely colourless and mostly has between 60% and 72% of alcohol. Such distillate can be bottled directly and sold as white absinthe, or absinthe blanche, called also La Bleue. Nowadays, most countries do not have a legal definition of absinthe, just like e.g. Scotch whisky, brandy or gin do. Therefore, producers may call their product “absinthe” regardless any legal specification. Compare, for instance, with Switzerland, where the definition of absinthe is given by the law. Hence, the absinthe there must always be distilled after maceration and may not be coloured artificially.

These kinds of absinthe are also called Bohemian absinthe. Some Czech producers use a special method of production where wormwood is left to infuse in alcohol. This releases the aroma and sometimes also the colour typical for absinthe. Some producers use a similar method as used for the pure absinthes, i.e. infusion, or maceration in alcohol followed by filtration, but then they leave out the final distillation phase. If an absinthe was produced using maceration in alcohol, no further colouration is necessary. The product will already have gained a distinctively green colour during the maceration. On the other hand, if using the method of infusing the herbs in hot water, additional colouring is usually needed, using artificial colours. Such beverages will get a bright, nearly fluorescent colour. Macerated absinthes differ considerably from distilled absinthes in their flavour – they have a strong herbal flavour with lower predominance of anise.

The chlorophyll in the bottle is gradually getting brown with time, as seen in the rare pre-ban absinthes from the beginning of the 19th century which were found in several places of the world after 100 years. This is why the distilled absinthes are usually bottled in dark, UV resistant bottles. Other absinthes can be bottled in transparent bottles. Absinthe should be stored at room temperature, in dry and dark place. However, it might even be stored in fridge or freezer. Well-stored, high-quality absinthes might still develop their aroma and flavour during the aging. For some absinthes, the herbs from the distillation are kept in the bottles. These absinthes are aging and developing their flavour and aroma constantly. 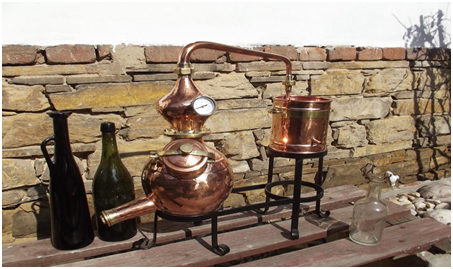