Several ways of serving absinth are known in the world. The essence of all of them is to mix absinthe with water, which makes it change the colour. Not only the French call this process loucher, or louche which means to become cloudy. When the distilled absinthe is mixed with water, it should gradually become cloudy, and the colour changes from emerald green into milky. The change of colour is connected with the essential oils contained in absinth which start condensing in water and start separating themselves from the alcohol. Sometimes the water can be dripping to the glass of absinth through a cube of sugar placed on an absinth spoon on the glass. This makes the sugar dissolve into the drink and make it smoother. This method is popular in the whole world.

Originally, absinth was served in a special glass on a round stem in the shape of a glass ball. The glass volume was usually around 75 ml. A special perforated spoon with a cube of sugar was placed across the glass. The original absinth drinkers would always prepare the drink themselves; a preparation by the waiter would have been an offence. This traditional way of consumption is slowly returning, as well as the replicas of absinth accessories. 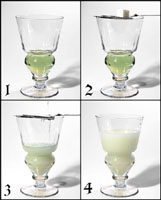 Decanters are not used frequently, and if so, then usually for domestic use. Fountains or brouillers are more common these days. A decanter works in the same way as a fountain but the process is more suitable for advanced absinth drinkers. The water is poured onto a sugar cube placed on an absinthe spoon into the drink through the narrow neck of the decanter. Decanters can be made of glass, or for instance from stainless steel.

Fountains have been used for serving absinth for years. The fountain is filled with iced water. Water drips from the tap through a sugar cube into the absinth until the drink’s colour is cloudy. This method used to be quite rare but became quite popular, thanks to its effect but also to its practical side. There are more types of fountains, with different shapes, sizes or number of taps. 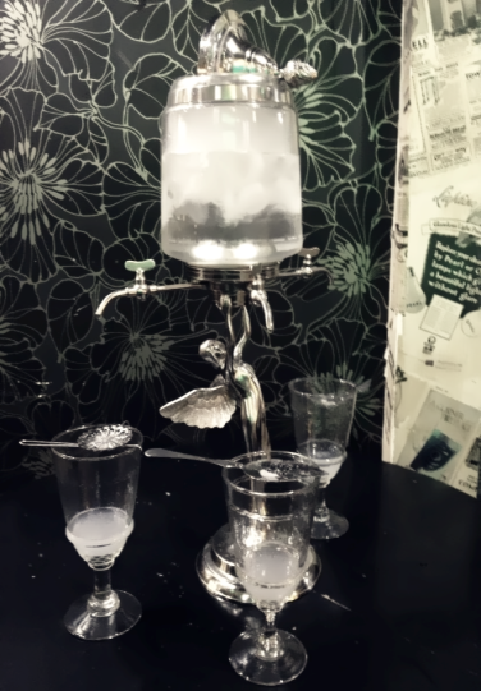 The use of broilers is quite rare. They can be made of glass or stainless steel (see picture). They are used only in a few bars around the world, mostly in the ones specialized in serving absinth. Using broilers is as spectacular – if not even more – as using fountains. In this case, sugar can be placed directly in the glass of absinth. Then, water is poured into the goblet of the broiler and drips slowly into the drink. In the end, everything is stirred with a spoon and the drink is ready. 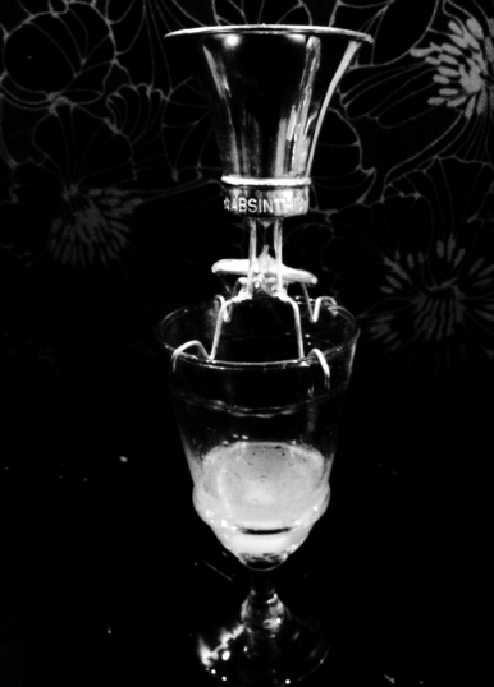 In the Czech Republic, a new method of serving absinth appeared in early 90s, and it turned out to be a successful marketing move. A cube of sugar is placed on an absinth spoon which is then dipped into the glass with absinth. Thanks to the high volume of alcohol, the sugar cube soaked with absinth can be easily set on fire.

The caramelized sugar then starts dripping into the glass. After 3 or 4 drops of caramel, the spoon is quickly dipped into the absinth again to put the fire out. The drink is stirred and then served. This procedure causes a slight change in the taste of absinth, and the drink gains a distinct amber colour. It also makes the percentage of alcohol lower, and hence the drink is smoother.

The preparation is very spectacular and keeps getting more and more fans among tourists and absinth beginners. However, this way of serving has obviously nothing in common with the original way of serving of distilled absinth. It is called the Bohemian tradition, and most of the “orthodox” absinth drinkers reject it. In some countries, it is common to serve absinth strongly chilled. In both cases though, we always serve a glass of water to accompany the drink. 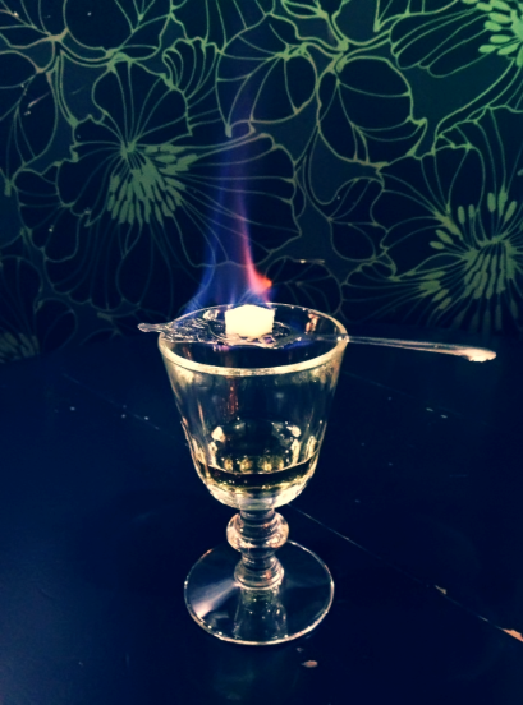 The cube of sugar used for preparation of absinth is usually small and fermented – the so called mocca cube. The size is perfectly sufficient for flavouring one absinth drink. However, if the drinker prefers a sweeter taste, we can of course use or or two extra cubes.

There are many kinds of absinth glasses in the market. They are mostly on a stem, but can have many different shapes. They can be made of glass or crystal. Some of them have a line on the wall to help the drinker tell how much water they should let drip in.

These special absinth spoons exist in countless shapes – about 500 kinds are known. The spoons are perforated so that sugar can drip into the drink through the little holes. In our Absintherie, you can find about 50 kinds of spoons on display.

The spoon on this picture is recommended mainly for preparation of macerated absinth by setting it on fire. The spoon is more rounded so that sugar stays inside easily when being burnt.